Learning it the hard way: After warm-up for race 2 of Triumph Street Triple Cup 2013 was already over, I crashed my bike in the triple left of the circuit at Oschersleben. My Streety looked like a scrap heap (pictures will follow).
Thanks to the help of the amazing T-Cup-Family I was yet able to start 2,5 hours later in race 2. 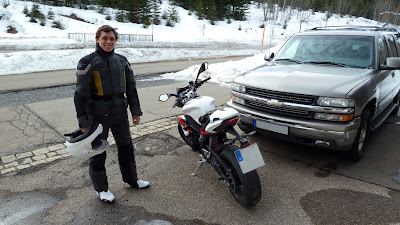 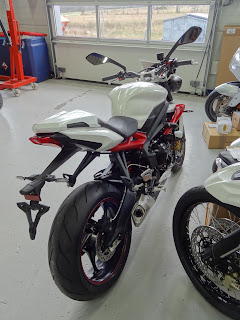 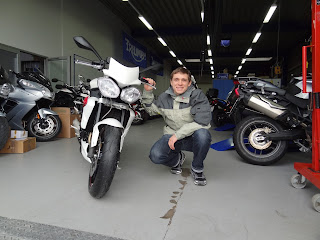 The route I took from Kathmandu to Munich

OMG, first snow was falling in Munich yesterday. It kind of marks the end of this year's motorbike season. This makes me a bit said, of course.
I'll still ride my bike from time to time, but probably no more day trips to the Austrian Alps. I suppose many of the higher passes will be covered with snow and ice soon if it hasn't happened yet. Luckily, I had the chance to have a couple of nice trips with my buddy Alex - he rides a Suzuki B-King - there in late summer. Actually, whenever both of us were free, we went for a ride together. That's also one of the reasons why I haven't updated my blog yet, besides a four weeks training with the German Air Force and an exam marathon that basically lasted till this week. Well, that's how it goes if you spent most of the semester driving with a motorbike from Kathmandu to Munich. I don't regret it at all though!
To give you a better idea which route I took in the end, have a look at this picture: 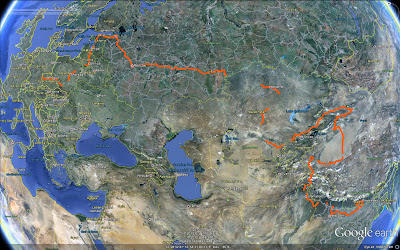 The reason for the gaps is not a teleporting device, but a malfunctioning GPS system. My former Garmin zūmo 660 wasn't working properly quite often as you can see, which was really annoying. That was actually the only annoying thing on this trip. I mean, the punctures I had were bothersome, too, but I consider that as a part of the adventure. Thanks to the support of Touratech Süd and the goodwill of Garmin I could exchange it for a brand new one.
Feel free to download all recorded tracks. You can view them in a software like Garmin's BaseCamp or Google Earth.
Posted by Kevin at 02:22 1 comment:

Here comes the sequel to my video from the previous post "The overdue update". Same style, different story.

This is just me summarizing my current trip for about 8 min. Nothing fancy, but at least an update...

As previously mentioned, I had some trouble getting the different visa. My short trips to Bangkok didn't make it easier as I always had to take my passport with me.
Nepal's never been an issue because I get it on arrival at the airport.
I was concerned about the Russian visa because they tightened the regulations for Germans recently. But with the support of my friend Sascha from Saint Petersburg I got a letter of invitation from a Russian travel agency with which it was straight forward.
The Chinese visa application center in Singapore insisted to get the original documents from the travel agency in China. FedEx needed 3 days longer than expected so there wasn't enough time left before I had to fly to Bangkok again (the second visit when I had to pick up the spare parts from the airport). To save valuable time I thought I can apply for it there. After 3 hours of queuing it turns out that the letter of invitation from China is only valid for an application in Singapore…once back there, I got it within one working day.
After the third visit to the High Commission of Pakistan in Singapore I eventually got the Pakistani visa. The whole process was really pain in the ass because they requested one more additional thing at every visit, e.g., when I brought the letter of invitation from a government registered Pakistani travel agency they asked for a copy of the passport of the owner of it to proof the genuineness of the document. How ridiculous is that? After some discussion I could convince them to check the registration number of the agency. Three days later I collected my Pakistani visa.
In the end, there wasn't enough time left to get the Indian (requires five working days, no urgent service) and Kazakh visa. So I'll have to apply for them on the way: the Indian one in Kathmandu and the Kazakh one in Urumqi.
Posted by Kevin at 22:34 No comments: